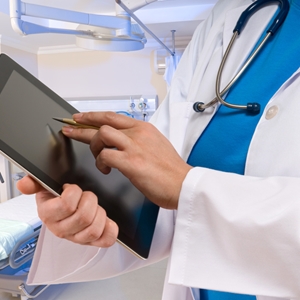 Many types of offices are seeing a diverse number of devices used for work, including not just standard PCs but modern tablets and phones as well. This holds true for some hospitals, too, and a new Harris Poll survey of 2,053 American adults suggests that newer devices may increase hospital efficiency. The results were mentioned in a press release on the website of Ricoh Americas Corporation, who commissioned the survey.

The basic findings, as outlined in this release, were that 77 percent of respondents think hospitals are "drowning in paperwork." In addition, around two-thirds of those polled said they would trust an internet search rather than deal with the hospital paperwork needed for a non-threatening healthcare issue. Of all the respondents, 960 had been a patient in a hospital some time since 2010.

Just as an overwhelming amount of paperwork struck these respondents as unwieldy, they expressed favorable opinions at the idea of a more connected work place. More than 90 percent supported hospitals investing in whatever technology they need for care workers to be able to spend more time with patients. Additionally, 85 percent said that information management technology makes hospital visits "more efficient."

Institutions like hospitals are best served by modernization tools that help them integrate new technologies. For an easy way to link mobile devices to core legacy applications, health organizations should use a web based terminal emulator, which places data in a seamless environment for organized and simplified access.

Inventu's Flynet Viewer is well-suited to the needs of hospitals and gives users equal access to mainframe-derived legacy applications on different screens. Integrating one portal remotely adds to the amount of systems incorporated into one access point preventing users from multiple, tedious logins.

To learn more about how this solution has served a major health system, read this case study.