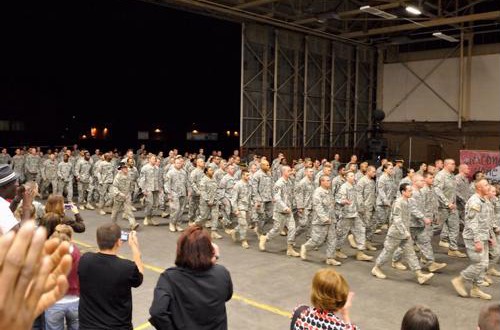 One of the main components of the U.S. Army's modernization plan is the fact that it will bring about a technological advancement in military strategy towards what are known as Multi-Domain Operations based in concepts like cyber and information warfare.

The branch hopes to be MDO-ready by 2028, according to a November 2018 document published through the U.S. Army Training and Doctrine Command. According to the Army's proposed definition, MDOs are intended to present adversaries with "operational and/or tactical dilemmas" through the use of a "combined application of calibrated force posture" conducted across "multiple domains and contested spaces". In particular, domains are identified as those pertaining to "space, cyber, air sea and land." The document characterizes certain maturing emerging technologies as driving "a fundamental change in the character of war," including artificial intelligence, hypersonics, machine learning, nanotechnology and robotics.

Seamless access to cloud data is the "foundation" for the U.S. Army's entire modernization effort.

In October 2019, Army Secretary Ryan McCarthy said that the purpose of a recently approved $700 million MDO-based 2021-2025 budget was intended to help take the branch away from "industrial age processes" and toward those that use data as an inherently strategic asset, according to an AFCEA International publication the same month. McCarthy specifically explained that data, cloud computing and AI algorithms would be used to expedite the collection and transmission of information during firefights. He also said that "seamless access" to cloud data is the foundation upon which the Army's entire modernization effort is based and tools would be used "without sacrificing cyber security or resilience."

According to Lt. Gen. Eric Wesley, the U.S. military already engages in MDOs, but the purpose of the current modernization effort is to stipulate that the branches "want to do it rapidly and continuously," per National Defense Magazine. The U.S. military first began adhering to its network-centric warfare doctrine in the 1990s, which is centered in creating an IT and computer-based advantage over adversaries. The current doctrine is further based on the concept of a "great power competition" with world powers including the People's Republic of China and the Russian Federation, the Epoch Times reported.

Technologies to bolster multi-domain operations
One example of the AI and data-driven nature of MDOs is the Army's development of a 50-kilowatt laser mounted on a Stryker that can be used as a targeting device and weapon capable of destroying incoming missiles, helicopters and other types of fixed-wing aircraft, according to The National Interest Magazine. With regard to the invention's use in MDOs, the laser can operate as an optical sensor able to "paint" targets, pointing them out for other weapons to engage. For example, an unmanned surveillance drone can receive targeting information on the ground from a Stryker's laser system that is then sent to the crew on an AC-130 gunship to engage with Howitzer cannons.

At one of the Army's most recent live field exercises carried out in April in May called JWA 19, the "high-intensive infrared and shortwave infrared illuminator" MR-2300 was tested, among other pieces of equipment, according to National Defense. Specifically, the Megaray-manufactured illuminator is capable of enabling a Stryker to identify targets at long-range in conditions with low to little light, such as underground.

Testing is underway for goggles that use an Integrated Visual Augmentation System to combine "synthetic training environments" with "real-world" data.

Aside from the MR-2300 examples of technologies tested at JWA 19 intended to bolster the communications capabilities of Army scouts include the InstantEye unmanned aerial system and the data collection set known as ENFIRE. Not only does the latter technology provide troops with a toolkit allowing them to more quickly connect to receive Stryker sensor data, it also takes the information and aggregates it to create a "route overlay". Another technology currently in early development stages are a form of prototypical goggles that use an Integrated Visual Augmentation System that combines synthetic training environments with real-world data to assist MDOs.

Whether an organization's network is as large as a military branch within the Department of Defense or as small as a corner store's point of sale system, IT modernization can always present integration challenges for users.

Here at the Inventu Corporation, we equip organizations of all sizes with a revolutionary cloud-ready terminal emulation server called Inventu Flynet Viewer. This solution allows organizations to enable terminal-based application access using clean HTML and JavaScript hosted on secure, high-efficiency servers. All in all, the Flynet Viewer supports streamlined IT modernization and meets employer and staff expectations in a way that feels both familiar and simple. Contact us today or review our extensive product catalog to see how Inventu can help you move to a pure-web terminal emulation solution.