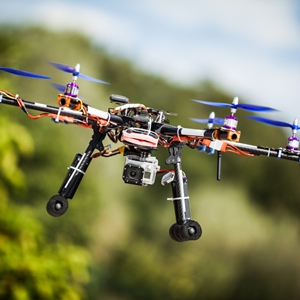 According to Fortune, BNSF Railways is launching a new program to use unmanned drones for railway inspections. The company has been granted permission by the Federal Aviation Administration (FAA) to dispatch three different models of low-hovering drones to increase infrastructure and personnel safety. Where a drone is safe to fly has been a significant issue for the FAA, and one that could affect logistics concerns, especially if they become a dominant way of delivering payloads.

Although the the company is responsible for more than 32,000 miles of railroad that is currently inspected by human employees, drones could provide a more comprehensive and cost-effective means of guaranteeing stability. In addition to providing accurate data, drones would also help lower the rate of injuries and fatalities among workers and potentially prevent bystanders from wandering onto the tracks.

The Washington Post features comments from the FAA on the use of drones in a previous statement. The organization referred to the possible results from other ongoing test programs, and alluded to the influence that such test programs with CNN and PrecisionHawk could have in the future.

In a statement, the FAA said that "each of these trials that could result in FAA-approved operations in the next few years," "They will also give insight into how unmanned aircraft can be used to transform the way certain industries do business – whether that means making sure trains run on time, checking on the health of crops, or reporting on a natural disaster."

Train companies running off of legacy mainframes can smoothly transition to a modern solution that will prepare them for new, technology-based initiatives. A web-based mainframe terminal emulator adapts easily to newer mobile devices. Companies should take the time and effort to modernize and choose a method that will let them anticipate future changes with minimum fuss and installation.